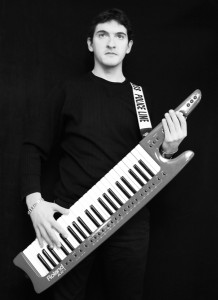 Marco Campagnolo, big fan of special effects, with a degree in Engineering Management and expert in mathematics and computer programming, was born in Borgomanero September 15th, 1979.
His musical interests are focused initially on classical music, to go then to the jazz and progressive rock.
In 1991 he started playing keyboards with his brother Andrea, guitarist and collector, in some cover bands in the area (and around Stresa), initially devoted to rock and then directing his interests to fusion music.
In 1994 he founded with his brother a band called Car Wash, where he composed original songs and classic rock songs arrangements. The experience ended in 1998, when he founded, with Samuele Tadini, singer and bassist, and drummer Danilo Nobili, Kerygmatic Project, a group originally known simply as Kerygma, creating a wide-ranging musical and cultural experience.

Web programmer
Currently he has been working as web programmer at a well-known e-commerce.

Collector
He is a collector of keyboards, passionate about technology and everything that revolves around the Nintendo company.