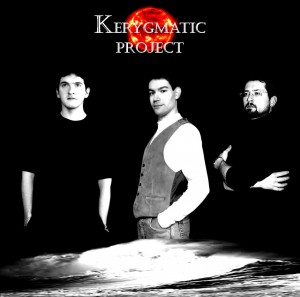 Kerygmatic Project was born in 1998, created by Samuele Tadini, Danilo Nobili and Marco Campagnolo, with the purpose of composing original music that recover in style and construction the great British progressive rock tradition of the seventies and eighties, renewed tradition with a new key able to embrace different styles, so as to constitute an original sound well recognizable. The Kerygmatic Project compositions are affected, in fact, from the contributions of various genres taken by rock, pop, jazz, fusion and classical music compositions, by proposing that, in fact, could hardly be categorized in a precise genre and that are the result a well-defined philosophy.
According to a definition that seems appropriate, the Kerygmatic Project can be seen as the fresh expression of prog & pop music, a term coined by the group, as they are among the few to have put in a cohesion not cloying, but well balanced, what a pleasant and non-trivial drifts from pop music with art-rock, which comes from the progressive tradition.
The choice to organize themselves as a trio, giving much of the keyboards, there is only one element that can remember Emerson, Lake & Palmer, but also the most characteristic expression of someone who wants to do with essential something that transcends it.
Some of the admirers of the group, use to call it as an Emerson, Lake & Palmer style trio, with a sound and character very similar to the Genesis Collins period era, but with an originality all its own.
The Kerygmatic Project, while not ignoring the great Italian tradition of PFM, Banco del Mutuo Soccorso and Le Orme, just to mention some significant examples, prefer to use the English language. The internationality and the musicality of the language, make English the language chosen for compositions which are channeled in a tradition that, initially, as we already mentioned, has its own origins in England between the end of the ‘60’s and the early ‘70’s.

PHILOSOPHY
The Kerygmatic Project philosophy is very simple: no prejudice and no party involvement. Rationality, emotion and the Christian faith, exercised in a context of respect for the person, become determined element for a creativity that is free to roam anywhere, but well aware of the need to refer to those absolute values which are based on truth and not on nothing.
The Kerygmatic Project music is therefore an expression of a language universally effective which has many shades and colors. Their music does not aim to be entirely new, but rather represent a renewal in the context of a precise tradition.
Accommodating their music means to accept an ideal expressive content that does not stop at mere pretense of an occasionally passing play, but that tends to make reflect deeply on issues that, sometimes, can also be distant from those commonly used in musical composition.
The originality of this, if you want to talk, perhaps is in the fact that literature, history, psychology, art, science, philosophy and theology, become the favorite fields of research of the group, as here it has been shown clearly. The group does not want to make music for the body but also for the mind, well aware that the protagonist whom they claim is always the person.

NAME
The term “Kerygmatic”, which comes from the “Kerygma”, has two basic meanings, and from both, in fact, the group has taken on the aspects that best represent it.
In the common meaning of the term, of Greek origin, it means “message” or, more accurately, “proclamation”. This is the main meaning accepted by the trio: Kerygmatic Project want to convey musically the importance of the communicability of ideas in a global sense.
In a philosophical-theological meaning, the term “Kerygma” means the earliest example of Christian preaching. In ancient times, in the community of origin, the term designated the core of Christianity. Even in that meaning the group took inspiration.
Kerygmatic Project are in fact a compact core in which the expression, communication, imagination, technique and humility (following the Christian way), become essential elements of their being a group oriented to the research and experimentation.